Fromage Gruyère SA is particularly careful when it comes to selecting its range of products. It prefers AOP cheese which has absorbed the character of the local soil. Gruyère AOP is its star product, the epitome of traditional Swiss know-how.

Gruyère AOP owes its unique taste to its recipe and to its traditional, yet controlled, production methods, passed on in its region of origin, Gruyère, ever since 1655: it is made with raw milk from cattle fed solely on natural pastures and fodder, with no added preservatives. Its secret lies in the ancestral know-how of the ripener.


This alchemy creates an exceptional cheese which is famous all over the world. It has a naturally fruity taste, enhanced by more or less pronounced hints of flavour which vary according to the local soil.

Today, Gruyère AOP is produced exclusively in western Switzerland. Its production conditions are laid down in specification documents. The stakeholders along the entire production chain, from the milk producer to the cheesemaker and ripener, undertake to achieve outstanding quality. This is validated by regular checks.

The round wheels of golden cheese are tended to carefully by the master ripener as the months go by. The cheese is fine in texture, with an ivory hue. It is surprisingly delicate, strong and malleable to the touch. 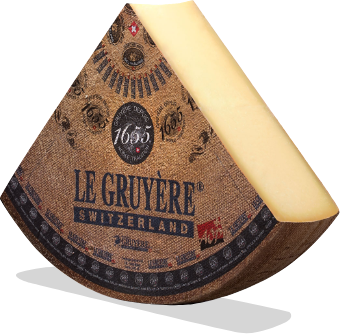